4th of July Weekend on Treaty of Paris Trail – Part 2 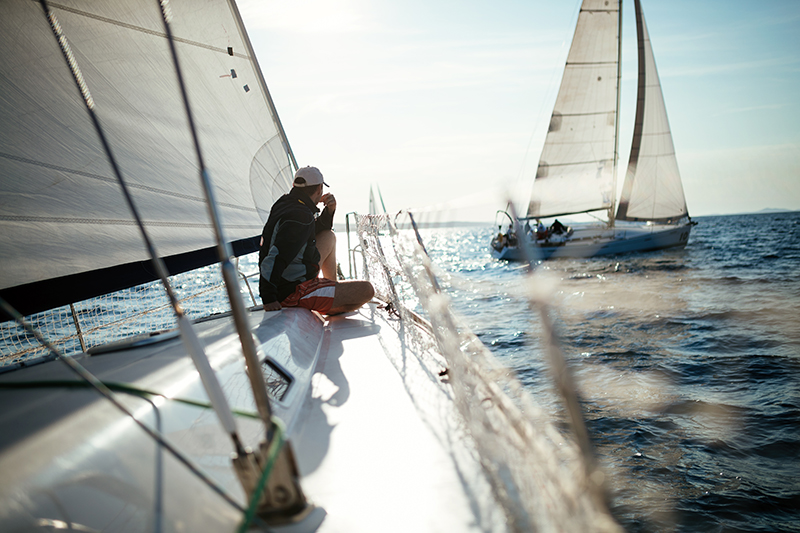 You probably know Annapolis is called America’s Sailing Capital. But you might not know that you can participate in sailboat races Wednesday nights on the Chesapeake Bay most of the summer.

Since being founded in the 1960s, Annapolis’ Wednesday Night Sailboat Races have been an increasingly popular summer tradition. Annapolitan sailors are serious about the competition, but in a cheerful way. These races have redefined what “Hump Day” means during the summer. Locals now celebrate the middle of their workweek being disrupted by this sporting event.

Typically, more than 125 sailboats in 15 classes participate, complying with U.S. Sailing Association rules. Landlubbers can avoid being seasick by watching the start and finish from the bars and restaurants along the Severn River, the Spa Creek Drawbridge, or boats along the race course.

Tactically maneuvering around the mouth of Spa Creek, the sailboats try to time crossing the start line just after the starting gun goes off. The racers then sail around several markers on the Chesapeake Bay, pass under the Spa Creek Drawbridge, and rush to cross the finish line to hear the cheers of well-heeled fans at the clubhouse of the Annapolis Yacht Club, which hosts the races.

Everyone Gets a Participation Trophy

The captains and crews range from professionals to amateurs. If you want to participate, all you have to do is book a cruise on either the Woodwind or Woodwind II.

Both sailboats were specially designed for the Chesapeake Bay, and they remind experts of the classic swift schooners that were considered “yachts” early in the 20th century.

In just the right moments, you and your loved one can even help to steer and crew one of these sailboats to victory.

Make sure to stop by The Crab Shack before or after going to the Wednesday night sailboat races.

Lovers of super seafood, including fat, juicy crab, don’t have to drive to Baltimore, Ocean City, Hooper’s Island, or Annapolis anymore. Stay close to home and enjoy wonderful deliciousness all year around at the two locations below!