Why We Love Caesar Salad

The Wonders of Seafood Chowder

10 Rules for Your Halloween Crab Feast 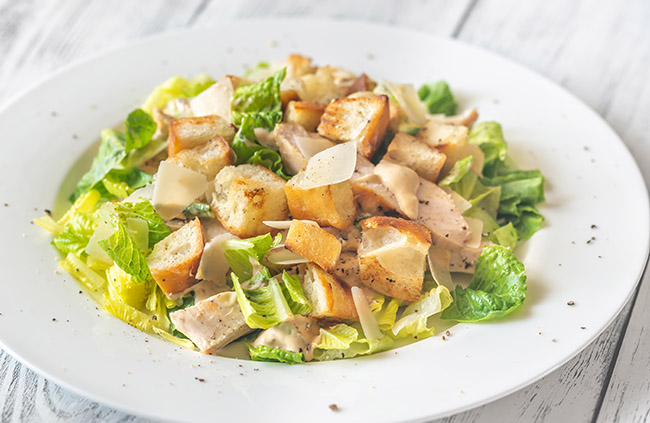 There is nothing like a great salad that makes us feel healthy eating it while it’s filled with wonderful flavors. Perhaps the most famous and delicious of the salads is the Caesar, and The Crab Shack – Crofton serves two versions – one with shrimp and the other without.

The invention of the Caesar salad is mainly credited to Caesar Cardini, an Italian immigrant and restaurateur who owned restaurants in the U.S. and Mexico. The salad was created out of necessity.

As Cardini’s daughter Rosa recounted, there was a 4th of July run in 1924 at the Hotel Caesar in Tijuana, Mexico that had depleted the restaurant’s kitchen supplies. Forced to create dishes with the available ingredients, Cardini had the makings of the first Caesar salad.

Using a bit of showmanship, Cardini had his chef toss the salad at the tables of the guests. There is now a poster inside Hotel Caesar’s restaurant stating: “Home of the legendary Caesar’s Salad”.

As recalled by Rosa Cardini, the original version of the Caesar salad did not have bits of anchovy as an ingredient. Her father was dead set against including anchovies in his invention. However, the hint of anchovy is provided by a dash of Worcestershire sauce. Even though the original recipe of Caesar salad did not contain anchovies, today’s recipes commonly list anchovies as one of the key ingredients.

When the salad crossed the border to the United States, one key ingredient was eventually replaced by the American version of the recipe. Today lemon juice is commonly used, rather than the lime that was sprinkled on the original Caesar salad.

Get Your Caesar Salad Here: The Crab Shack Menu for Crofton.

Lovers of super seafood, including fat, juicy crab, don’t have to drive to Baltimore, Ocean City, Hooper’s Island, or Annapolis anymore. Stay close to home and enjoy wonderful deliciousness all year around at our two new locations in Maryland!